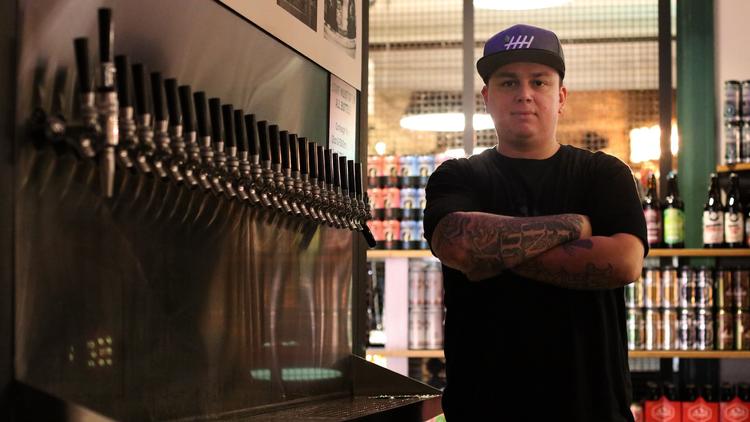 We've known if for a long time, Lance - our bartender at our Point Loma / Liberty Station location - is passionate about craft beer and it shows in his service to customers! So much so that he was recently named one of San Diego's favorite Beertenders by Pacific Magazine!

From the Article:
What is it about these four that stood out for beer lovers? From the looks of comments, it was personality, making time for service and knowing what the customer wants. One voter proclaimed, “Lance (Regenold) kills it on the weekend at Bottlecraft Liberty Station Dude goes non-stop but always has times to give solid recs.”

How long have you been bartending?
LANCE: I worked in fine dining the last 10 years before Bottlecraft. I’ve been there two years, so technically this is my first bartending job.

Are you from San Diego?
LANCE: I was lucky enough to be born and raised in San Diego.

Best thing about bartending in San Diego?
LANCE: Well, I’d have to say the people. I’ve met some of the coolest, most generous human beings working in this industry. They really make my job too easy. I’m truly blessed to be where I am, surrounded by folks who love craft beer as much as I do.

It's tough, but name your favorite beer (ok, beers).
LANCE: I love my West Coast and New England IPAs, also barrel aged sours and stouts. My fridge is usually full of whatever new IPAs Modern Times, Mikkeller SD and Pure Project puts out. Some of my favorite beers include Societe’s The Pupil, Russian River’s Blind Pig, and Cellarmaker’s Double Mt. Nelson.

What's one funny/unusual thing about you?
LANCE: Most people trip out on my hair. I have the old hipster comb over fade with a hard part. I also have a rather large hop heart tattoo on my forearm with beer coming out of a tap handle artery. People almost always say something about it when I hand them their beer. One lady who wasn’t really into beer asked me if I was a vegan because I had a huge artichoke tattoo on my arm.

And finally, who is your favorite bartender?
LANCE: Tyson Blake at O’Briens.